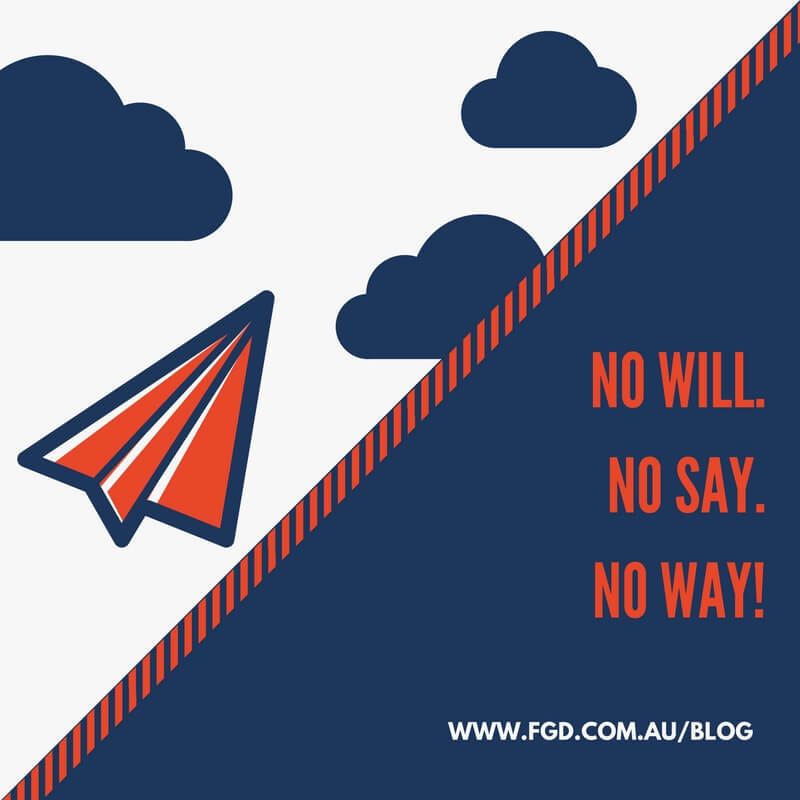 It is an oft-repeated statistic that approximately 50% of people will die without a valid Will in place.

I can understand why this is the case – no one wants to look death in the face and think of their loved ones in a world that no longer includes them.

As if that wasn’t enough, the otherwise solemn tone of the conversation is lowered when we end up focussing on what should happen to all their stuff when the inevitable happens. The thought process then tends to end with something along the lines of “I don’t have anything to give away anyway.”
I see it differently.

First, almost every adult of working age has something to give away – they have superannuation. With some planning, the superannuation death benefits (often including a default level of life insurance) can form part of your estate. Even the most basic of default cover can easily extend into the hundreds of thousands of dollars.

Second, I believe a considered estate plan and clearly-drafted will is the greatest legacy you can leave for your loved ones. By leaving a Will you give your loved ones certainty. You tell your family who you want to deal with your affairs when you’re gone, you tell them to whom you want your estate to be left to and – sometimes more importantly – you ensure that those who should not benefit receive nothing.

If you were to die without a valid Will your family are left with uncertainty as to your intentions. Worse, they are forced to divide your assets in a way that they may know you would have hated.

I pause to note that not everyone who dies without a Will does so intentionally. Some people actually make the effort to set up a Will but marry after they make the Will, not realising that marriage revokes the Will. (Note: There are ways to avoid this depending on which jurisdiction you live in, but this is a discussion for another day.)

Dying without a Will is referred to as intestacy. Intestate estates are distributed according to a strict statutory formula that pays no regard to your intentions and varies with your family circumstances and in which state or territory you live when you pass away.

The application of the formula tends to lead to perverse or unjust outcomes and can be entirely avoided by making a Will. Making a Will is empowering – if not for you, then at least for those you leave behind.
I will illustrate it with a few examples.

If a family member has died without a will or if you have questions about how intestacy might apply to you in your current circumstances, you should call Canberra’s specialist wills and estates lawyers for an obligation-free chat.

Greg and Sian have been together for 14 years and were recently engaged. They have two children – Samuel (12) and Harriet (10).

The week before they were married they see a lawyer (who they didn’t mention the marriage to – oops!) and make a will in favour of each other and their children. They are married as planned. Unfortunately, Greg died suddenly and unexpectedly on their honeymoon.

The problem is that Greg’s Will was revoked by his marriage to Sian. Greg has died intestate.

The ACT intestacy laws provide that he spouse receives the household effects (e.g. TV, table, bed etc), first $200,000 (plus interest), and a third of the balance of the estate ($200,000). Samuel and Harriet will share the rest of the estate between them and receive it when they are 18. Sian has now lost her husband and has to share his estate (which she may well see as ‘theirs’) with their children.

The entire situation is different had Greg and Sian lived in Queanbeyan. In NSW the spouse receives the whole estate if the children are the children of the deceased and the spouse.

James and Sharon were married 18 years ago. They have never made Wills and decided they did not want to have children. Instead, they accrue significant assets in the form of investments and superannuation over the course of their relationship.

Unfortunately, their relationship deteriorates and they separate amicably. They complete a property settlement but decide against divorcing because of the costs. They agree that they will divorce if either re-partners in the future, but it not a priority now. They do not consider what would happen if either of them die without a valid Will in place.

A few years later Sharon is diagnosed with breast cancer. After a year-long struggle she loses the fight and passes away. Prior to her death she had told her brother Ben and that he would receive her estate.

But Ben is not entitled to Sharon’s significant estate. In all Australian jurisdictions James, as the spouse, takes the lot.

This outcome was entirely avoidable: Sharon could have made a Will during their separation or obtained a divorce. Instead, Ben’s grief is compounded by the unjust distribution of Sharon’s estate to James.

Brett is a 25-year-old carpenter. He has limited assets some superannuation with some insurance in it that he pays little attention to. He has never made a Will.

Brett was an only child and was raised by his mother Glenys. Brett’s father, Duncan, left when Brett was 5. They have not heard from Duncan since then.

Brett is killed in a workplace accident. Brett did not have a partner or children. He was survived by Glenys and Duncan.

The estate is shared equally by Brett’s surviving parents. So, Duncan receives an equal share of the estate with Glenys. This would be devastating for Glenys.

The outcome could be worse still. Imagine Glenys had died first and Brett had inherited her estate. If Brett then passed away without a will, Duncan would inherit Brett’s whole estate, including what Brett may have inherited from Glenys!