Superannuation Election Policies for those dealing with Divorce or Death

I thought there might be some benefit in drilling down through the policies of the major parties from the perspective of how it may impact on people going through a separation or if there is a deceased estate. I have already provided an initial review of the budget in an earlier blog post so I won’t be rehashing that. I also don’t propose to look into every detail of the policies.

This analysis also comes with a big caveat that it is based on what the parties have said – there is a possibility that more policies will be announced or clarified as the election progresses. As with everything the devil is in the detail and some of my concerns may be addressed by the time whichever party is in government at the time attempts to legislate it. I have also chosen not to look at the Greens party policies due to size and time constraints.

First a summary of where the parties stand on the five main superannuation policy areas: 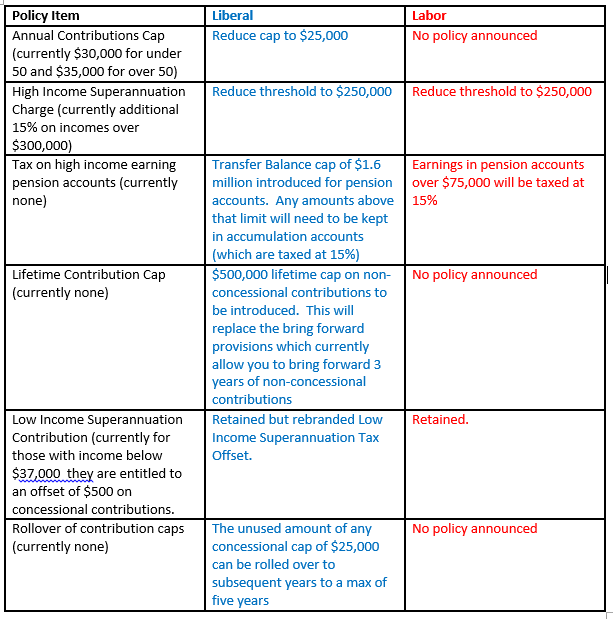 Impact on proposed policies on divorces

The biggest changes proposed that will need to be considered by people who are separating (whether married or de-facto) are the proposed lifetime cap to non-concessional contributions and the proposed reduction of concessional caps.

Quite often when people are separating the two biggest assets they have are their home and their superannuation. It is quite common to negotiate a settlement where one person retains the house and in exchange the other party retains a greater proportion of the superannuation pool.

Think of the following example:

Kim and Kanye are separating. Kanye earns the higher income as Kim has had to reduce her work to look after their child North. Their pool includes a house worth $800,000, Kim’s Super of $500,000 of which she has contributed $400,000 non-concessionally from a compensation payout and Kanye’s super of $300,000 which is made up entirely of concessional contributions).

Let’s look in on them 10 years later. Kim after a period of part-time work while North was very young now wants to start planning for her retirement. To her dismay she realises her superannuation has only grown to $200,000 as she has only been able to make minimal contributions. She is now in the financial position where she can start contributing more to her super.

No matter how hard she may try Kim will not be able to increase her superannuation beyond making concessional contributions of $25,000 each year. It will be very hard for her to grow her superannuation to an amount which the experts is necessary for a comfortable retirement of around $545,000 in todays terms. While it is true that the money she cannot put into superannuation can be invested elsewhere those investments will not have the advantage of the generous taxation treatment that she gets in superannuation.

The loss of the previously flexibility that people had to bounce back from a superannuation split may mean that some people will need to think very carefully about how to structure settlements. And those who have already had a settlement may find their plans thrown into disarray.

Both parties are in effect proposing a cap on tax free earnings in the pension phase but they are going about it in different ways.

The Liberal Party will force superannuants to roll over any amount in a pension account over $1.6 million back into an accumulation where the earnings will be taxed at the usual concessional rate of 15% or out of super entirely where it will be taxed at marginal rates.

Let’s look at an example:

Channing and Anna have both retired and want to start a pension. Channing has a superannuation balance of $2 million. After setting up the pensions Channing dies -what is the outcome under both policies:

Due to the cap Channing had a pension account of $1.6 million which was reversionary meaning that Anna will continue to receive the pension following Channing’s death tax free. The balance of around $400,000 was retained in an accumulation account so will be paid as a lump sum. The payment will be tax free however any earnings on that amount will be taxed at Anna’s marginal tax rate.

It does not appear to have been specifically addressed in the budget papers whether the $1.6 million cap continues to apply or is inherited by Anna. That is, if Anna has already used the entirety of her cap does she need to put all of the $1.6 million back into accumulation or pay it in cash? Or will she in effect have the advantage of two caps? On a plain reading of the papers it would suggest that the later will apply.

Due to there being no cap Channing had a pension account of $2 million which was reversionary in favour of Anna. The pension she will receive from that pension will continue to be tax free up to $75,000 per annum, any earnings beyond that (whether paid or retained in the account) will be taxed at 15% per annum. It would appear from Labor’s policy that the limit of $75,000 is personal so would include a consideration of whatever earnings Anna’s own pension account is earning.

Whichever party is in power after 2 July this year we can expect substantial changes to the superannuation environment. It will be interesting if there are any adjustments to the policies as the above issues percolate through the industry. 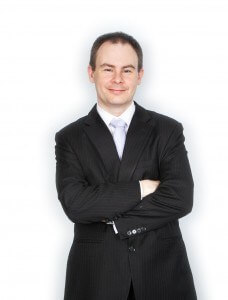