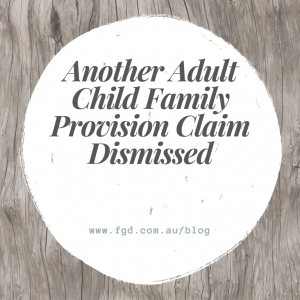 The Supreme Court of Western Australia has dismissed yet another adult child Family Provision Application.All Australian jurisdictions allow children of all ages, including adult children, the right to bring a claim against a parent’s estate for greater provision.

Traditionally, adult children, and particularly sons, have had to show the Court that they have a special need or special claim in order to succeed in an application.

The case of Kennedy v Kennedy, which can be found here, was decided in mid-2016. The deceased left a Will dated 2011 and died in 2013. The Will divided her $1.7 million estate equally between her 4 children. Each child would have been entitled to about $432,000 from the estate.

The applicant in this case was the deceased’s 66 year old (unmarried/un-partnered) daughter who because of various illnesses, was unable to work. She had assets of approximately $115,000, made up of household contents, cash and a car. She did not own her own home, lived in rented premises and was on a Centrelink pension. There was no suggestion of estrangement and she had a reasonably good relationship with her mother before her death.

Why did the applicant bring a family provision claim? She told her Court she needed her own home. Submissions were made by her lawyers that she should be given a sum of capital sufficient to purchase a reasonably sized house. Evidence was given as to the median price of properties in different suburbs of Western Australia.  The suburb she was residing in, which is where she preferred to remain, had a range between $461,000 and $631,250.

The Court dismissed her claim on the basis that she did not need to buy a property. The Court said the following:

“Once again it comes down to the question of why it is necessary for the plaintiff to buy a property. She has rented for many years and at least at present is in satisfactory accommodation. If she were to continue to rent she would, as I have indicated, have sufficient capital to meet her needs. So really the case comes down to this. Was there a moral duty on the deceased to provide sufficient in her estate to allow the plaintiff to purchase a property in which she could reside. I am not satisfied such a moral duty existed”.

Interestingly, the applicant’s reliance on a Centrelink means tested pension was not taken into account at all (which is somewhat consistent with the general principles in this area)

Once again, we are seeing a greater reluctance from Courts to give awards without “special need” or “sufficient cause” to adult children. This case is likely to be cited in future claims against the need for an adult child to have a house of their own. 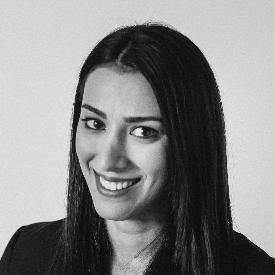