Commas of consequence – The ‘Oxford comma’ 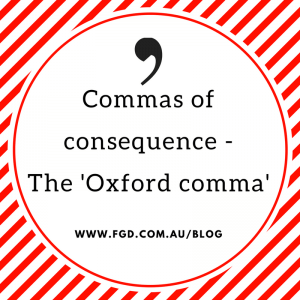 It is rare for me to sit up and take note of decisions made by American courts. However, when the decision hinges on a matter of punctuation that inflames the deep passions of many (and the intense apathy of the others) I most certainly do.

The matter of punctuation in question is the famous ‘serial comma’ (also known as the ‘Oxford comma’) is the comma that appears before the ‘and’ in a list of three or more. Fans of the serial comma (and I confess to being one) argue it helps to clarify the meaning of sentences by ensuring the last two items of the list are not considered one item or as a definition of the earlier item in the list.

A commonly-cited example is the following quote extracted from a documentary:

Among those interviewed were his two ex-wives, Kris Kristofferson and Robert Duvall

By omitting the comma before the ‘and’ one could argue that Kris Kristofferson and Robert Duvall are the two ex-wives who were interviewed. But, I hear you may cry, this is mere pedantry with no consequences in the real world. I am pleased to say that I have an example that had ten million consequences.

In O’Connor v. Oakhurst Dairy, No. 16-1901 (1st Cir. 2017) the United States Court of Appeals was asked to rule on the question of whether delivery drivers are exempt from receiving overtime. The statute set out a general right to overtime while excluding certain forms of work from receiving the benefit of the overtime law. Among other exceptions, the overtime law did not apply to (emphasis added):

If the list describes your occupation then you were not entitled to overtime in the State of Maine, so workers would prefer not to be included in that list if possible.

The dairy, who faced having to pay a reported $10,000,000 in overtime, argued that the law covered two distinct items – the act of ‘packing for shipment’ and the act of ‘distribution’.

So, a major part of the legal issue boiled down to a question of statutory interpretation over – you guessed it – the absence of a serial comma. In the end, the Court held:

Each party recognizes that, by its bare terms, Exemption F raises questions as to its scope, largely due to the fact that no comma precedes the words “or distribution.”  …

We conclude, however, that Exemption F is ambiguous, even after we take account of the relevant interpretive aids and the law’s purpose and legislative history. For that reason, we conclude that, under Maine law, we must construe the exemption in the narrow manner that the drivers favour, as doing so furthers the overtime law’s remedial purpose.

The moral of the story is that the absence of a serial comma contributed to a significant legal issue of financial consequence both for drivers and for the dairy.

I will admit that the omission of the serial comma mostly does little more than to add an amusing – and most often clearly incorrect – alternative reading which takes me an extra moment to comprehend correctly. I also try to re-cast sentences to avoid the need for the serial comma at all.

But whatever you feel about the serial comma you have to agree that sometimes, just sometimes, it is actually quite important.

At Farrar Gesini Dunn, we understand how to draft legal document such as Wills, Enduring Powers of Attorney, Binding Financial Agreements/pre-nups, and other legal documents with clarity and plain English at the front of our minds. If you need help drafting a document to suit your needs then contact us today. 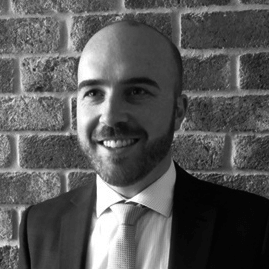