But… De Facto sounds so serious? 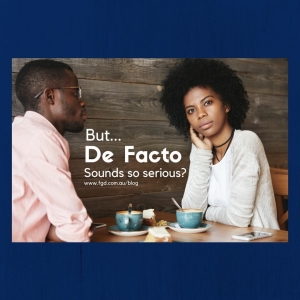 Sometimes people come to us thinking that their relationship doesn’t meet the definition of de facto. Whether it is a young couple in their twenties who never shared a house but have been dating since their first year of university, a single mother who was only dating the father of their child for a short time, or a same-sex couple, questions often arise as to whether the Family Law Act will apply in their matter.

What you quickly learn in our line of work is that no relationship is the same and that thankfully, more often than not, the Family Law Act extends to protect a wide range of people and relationship circumstances.

Section 4 AA of The Family Law Act outlines a number of factors which the Court considers in determining whether or not a separated couple is classified as a de facto couple for the purpose of legal proceedings. There isn’t a particular factor that is considered more heavily than the others, instead the Court (or your solicitor) will take a holistic approach.

A couple of important things to consider are that;

Two other notable factors are that you can’t be in a de facto relationship if you are married to each other or related by a familial connection. If you don’t tick either of those factors, then the court will look to the ‘circumstances of the relationship’ in deciding whether two people were in a relationship as a couple ‘living together on a genuine domestic basis.’

Below are the factors the Court must consider:

1. The duration of the relationship;

Generally speaking, the longer the better. There is a general 2–year rule but there are exceptions to this. Whilst a one-night stand is unlikely to reach this threshold, a relationship of 12 months, or a short relationship involving a child will be given more weight.

2. The nature and extent of the common residence;

Under the law, it is not a requirement that De Facto couples have to live together under the same roof. The fact that a couple regularly stayed together over night would be evidence to indicate, to some extent, shared common residences.

3. Whether or not a sexual relationship existed;

Just because you aren’t sleeping with your partner does not mean that you are not in a de facto relationship with them. Whilst this factor is given weight, the Family Law Act doesn’t discriminate against couples who for religious, cultural or medical reasons aren’t in a sexual relationship.

4. The degree of financial interdependence, and any arrangements for support, between or by the parties;

A lot of people come to us and say that they kept their finances separate over the course of their relationship. Unfortunately, this doesn’t automatically exclude the existence of a de facto relationship. Regardless of whether or not you split the grocery bill down the middle each week, the nature of joint expenses and whether they contributed to both people in the relationship are given consideration. More often than not couples have a higher degree of financial interdependence than they first thought.

5. The ownership, use and acquisition of property;

This includes whether or not a couple entered into significant purchases together such as the purchase of a car or house. Or if one person footed the bill, whether or not the other person benefited from the use of that property.

6. The degree of mutual commitment and mutual support;

This is a broad factor, anything that is suggestive of the fact that both people envisaged a future together and their willingness to support each other both financially and emotionally will be considered.

Things to consider in this regard are whether a couple had a mutual intention to continue their relationship into the future. This might be through the purchase of a house, getting engaged, travelling together, the sharing of motor vehicles and day to day expenses, (or even the purchase of a puppy??).

7. Reputation and “public” aspects of the relationship;

This comes down to whether or not you were a couple in the eyes of your family, friends and/or the broader public.  Whilst the fact that your friends have given you a ‘couple name’ other examples of your public perception as a couple include attending public events, entering into significant purchases together, or having a child together.

8. Whether the relationship is or was legally registered;

Some states and territories in Australia have relationship registers, where couples can legally declare that they are in a de facto relationship.  However not all states have this requirement, and not all couples would chose to ‘register’ their relationship even if they could, so it is not a defining factor that the court considers.

9. The care and support of children;

As you can see there are a variety of circumstances that the Court considers in determining the existence of a de facto relationship. It is very important to seek legal advice if you have recently separated and any of the above factors apply to you. De Facto couples can apply to the Court for both property settlement and parenting arrangements. Specific time limits apply to making such an application. If you don’t seek legal advice you may be at risk of your former partner making an application against you without you even being aware it was possible or losing out on legal rights that you are entitled to post separation.

If you have recently separated and are unsure whether you were in a de facto relationship, you should contact one of our expert family lawyers today at fgd@fgd.com.au or on 02 6257 6477.