The next best thing to same sex marriage? 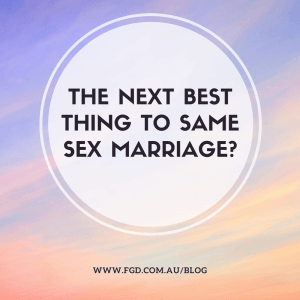 I recently read an article describing a same sex marriage agreement known as the ‘Evermore Pledge’ which, purports to be a contract between same sex spouses that will specifically address aspects that are usually covered under the Marriage Act 1961.

There are a number of elements of this proposal that are of concern to me. It is, in one’s view, dangerous to describe the so-called Evermore Pledge as being similar to a wedding and marriage itself, because to those who seek marriage equality, this undermines their campaign for equality and recognition.

While same sex marriage is not yet legalised, there are existing options for same sex couples that can give the parties the same protection as heterosexual couples with respect to property rights and spousal rights by categorising their relationship as a de facto relationship.

In essence, the so-called Evermore Pledge is in actual fact a collection of agreements such as Wills, trusts, Powers of Attorney, next of kin nomination and superannuation death Benefit nominations.

At our firm, providing advice to a client who is part of a same sex relationship would be done in the context of both family law and estate planning.

If you are part of a same sex relationship, contact our experienced team to discuss your options both from a family law and an estate planning perspective.