Annulment – When can you annul a marriage? 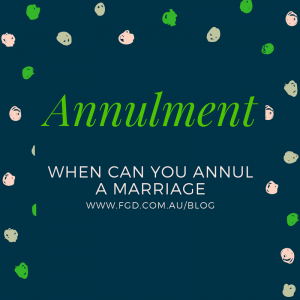 In Friends, Ross and Rachel get drunk in Las Vegas and get married. The next morning Ross says he will get it annulled but he doesn’t because he’s ashamed about getting divorced again.

I don’t know the full plot but someone told me it’s really complicated because Ross still loves her deep down.

Unfortunately (in my opinion) in Australia there aren’t many ‘interesting’ grounds for annulment. I think people sometimes understand that if you haven’t consummated your marriage, or if you regret getting married, or if you have a very short marriage, you can have the marriage annulled. That would make for some interesting litigation but as I say the grounds are a bit different to that.

In my experience the main reason people have wanted to pursue annulment is because they don’t want to wait 12 months after separation, which you have to do in order to apply for a divorce.

The grounds for annulment are, once you follow the sections around, set out in s23B of the Marriage Act (Commonwealth legislation) and they are:

Obviously this isn’t intended to be comprehensive advice but if you think any of the above might apply or you want to talk about your options, let me know, it’s really interesting work and I’d be happy to help you.