After separation does the spouse in the home get credit? 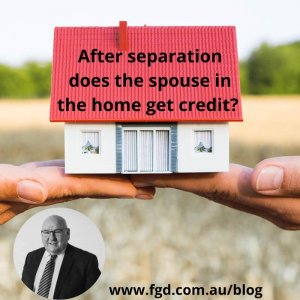 It is not uncommon that following a separation one party remains in the family home and pays the mortgage instalments and the other party leaves and accommodates themselves elsewhere, usually paying rent.  It may be some time before they achieve property settlement and even longer if they have to go to a court hearing about that.  In the meantime one is paying off the house and the other isn’t.

I am often asked whether there is a credit in favour of the spouse who pays the mortgage.

On the other hand it would ordinarily not be appropriate to take into account the cost of accommodation of the party who has been out of occupation and had to pay rent, unless there is some particular circumstance to justify that.

This was decided many years ago in a case called Wardman and Hudson.  It remains the law.

The sort of circumstance where payment of mortgage might justify an adjustment in that party’s favour would be where the mortgage payments were inordinately high, far greater than the rental value of the accommodation that the party is receiving.

However the situation may be different if there is no mortgage on the home and the party who stays there has no significant accommodation costs, whereas the other party has rent to pay.  It those circumstances it has been held (Lalor’s case) that an adjustment in favour of the renting spouse should be made in a property settlement.  The amount of that adjustment will vary from case to case and will depend on the total of the rent paid and all the other considerations set out in the Family Law Act.

Overall, every case is decided on its own facts and the courts are careful to avoid laying down strict principles as to which must be applied regardless of the individual circumstances of the case.  However as a general guideline the courts adopt the approach above.