A Valid Will versus an Estate Plan 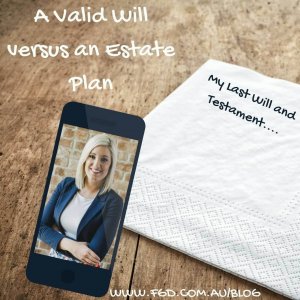 A Canberra Times article published on 11 October 2017 reads ‘Unsent text message with a smiley face counted as a valid will, court rules’ reminds us that even if you have a ‘valid Will’, it can still be challenged.

The Queensland Supreme Court found that an unsent text message on the phone of a 55-year-old man who took his own life was valid; despite it cutting out his Wife and son. The message read that his brother and nephew should “keep all that I have house and superannuation, put my ashes in the back garden” and that his Wife should “take her stuff only she’s…gone back to her ex AGAIN I’m beaten“.

There are several formal requirements for a Will to be executed in Queensland, including that a Will must be:

The Court is able to dispense with these requirements in the event that the document, or part of it, purports to state the testamentary intentions of a deceased person. In doing this, the Court would look at:

In the judgment delivered on 9 October 2017, Brown J ordered that the usual execution requirements of the purported testamentary document of the deceased, being an unsent text message (“the Will”) were to be dispensed with. This was, in part, because there was no evidence showing that the deceased had expressed any contrary intention about the Wife and/or the son receiving any of his wealth. Her Honour went on to state, in explaining her decision:

“I accept the evidence that the deceased maintained a relationship with (his brother and nephew). I consider that at least at the time of his death the deceased regarded his relationship with the (Wife) as at an end, given that she had moved out and that he had asked her to stay with him until he was employed which she had rejected. Their relationship was relatively short. Thus her exclusion in those circumstances is explicable and does not indicate that he did not intend the message to be operative on his death as a will. His message makes it clear he contemplated her claim on his assets at the time he typed it.”

The brother and nephew were then made executors of the estate with the text message Will being admitted to probate. Her Honour concluded her judgment by remarking that the Wife “is entitled to bring a family provision application, notwithstanding the declaration that the text message is the deceased’s will.”

This is a good reminder that there is no such thing as a basic Will, or that if there is – the risk of a challenge to it is increased, with the costs of such a challenge to be taken out of the estate assets.

Here at Farrar Gesini Dunn, we offer two levels of service when it comes to advice and documents regarding where you want your assets to fall at the time of your death. This caters for those looking to just make a valid Will, and for those wanting more tailored estate planning services. We can also give you advice about making a family provision claim, or defending one.

If you want to discuss how may be able to help you or your clients please contact our Estates team at estates@fgd.com.au or 02 6181 2050.

Courtney Mullen is an Senior Solicitor in our Canberra office.